Skip to content
Posted on February 16, 2012 by Greg Williamson 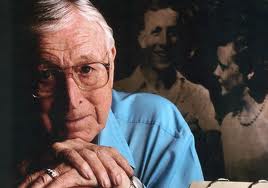 Yesterday, while studying, I came across this story about Coach John Wooden. Seems like it’s a perfect one to share during the week of Valentine’s Day.

Coach John Wooden is the undisputed…best college basketball coach of all time…. But Coach Wooden had his eyes on something other than popular acclaim. [Once when asked about the reality of his approaching death, Wooden responded,] ‘I’m not afraid to die. Death is my only chance to be with her again.’ The ‘her’ John referred to was his wife, Nellie, who died in 1985 after fifty-three years of marriage. John is still very connected to this woman. On the twenty-first of every month, he writes a passionate letter to Nellie, telling her how much he misses her, loves her, and values the time they had together. Then he folds the letter and puts it on a pile near where he sleeps. That stack now has over two hundred letters. By his own admission, John would gladly leave this world of acclaim if in doing so he could be reunited with the love of his life.